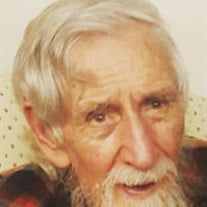 Delano “Bud” Leonard, 85, of Napoleon, Ohio passed away at home on Wednesday, January 24, 2019. He was born on July 21, 1933 in Liberty Center, Ohio to Edward and Ruth (Netcher) Leonard. He married Carol Minnick on February 2, 1957. Bud worked for C.F. Rausch & Sons for 35 years, doing roofing and sheet metal fabrication. He also installed furnaces while working for Charles Minnick and Rausch Lumber Company. Bud made the sword and metal decorations that are on the Henry County Courthouse when the restoration was done in 1997. He proudly served his country in the US Army and was a life member of the Napoleon American Legion Post 300. Bud is survived by his loving wife of 62 years, Carol; son, Kevin (Pam) Leonard; daughter, Kara (Jim) Long all of Napoleon; grandchildren, Hannah Leonard (Moe Aldaghmi), Lucas Leonard (Miranda Merschdorf), Amanda (Joel) Espinoza and Allison Long; great granddaughter, Haddie Grace Espinoza; sisters, Patricia (James) Meyer and Rita (Robert) Morin and sisters-in-law, Edna Leonard and Betty Leonard. In addition to his parents, he was preceded in death by his siblings, Wilma Zaleski, George, Edna Roth, Duane, Virginia Hoover, Donald, Bill, and an infant sister, Audrey. Funeral Services will be held on Wednesday, January 30, 2019 at 11:00 AM at Rodenberger Funeral Home, Napoleon where military honors will be presented by the Napoleon American Legion. Interment to follow at Forest Hill Cemetery. Visitation will be held at Rodenberger Funeral Home, Napoleon on Tuesday from 4:00 - 8:00 PM and Wednesday from 10:00 - 11:00 AM. The family suggests that memorial contributions be made to First Presbyterian Church or a charity of your choice. Online condolences and messages may be shared with the family at rodenbergerfuneralhome.com

The family of Delano "Bud" Leonard created this Life Tributes page to make it easy to share your memories.

Send flowers to the Leonard family.