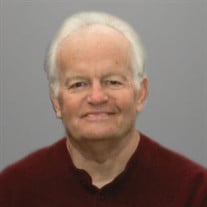 David Michael Shepard, 76 of McClure, Ohio, passed away Monday, September 7, 2020 at Wood County Hospital, Bowling Green, Ohio due to complications from surgery. Dave “Mike” was born January 18, 1944 to Ben and Garneitta (Jacobs) Shepard. On September 2, 1967 he married the love of his life, Janet (Seedorf) Shepard, who survives. He was a graduate of McClure High School and Bowling Green State University. He taught Industrial Arts in Liberty Center and Napoleon Area Schools and then went on to become an industrial tools salesman at Ingersoll Rand. In his spare time, he enjoyed camping, flying his airplane, riding motorcycles, politics, his Tennessee cabin, and anything with an engine. He especially enjoyed being with his family and grandchildren. Dave “Mike” is survived by his wife, Janet; daughter, Heather (Keith) Seiler of Liberty Center; sons, David Shepard of McClure, Clinton (Lynette Walker) Shepard of Liberty Center; 4 Grandchildren, Garret and Jadelyn Seiler and Ellie and Jaxon Shepard. Friends and family will be received at the Rodenberger-Gray Funeral Home, McClure on Friday, September 11, 2020 from 4-8:00 pm for a celebration of life gathering. In lieu of flowers, the family suggests memorial contributions be made to St. Paul Lutheran Church, McClure, the American Cancer Society, or a charity of the donor’s choice.

The family of David Michael Shepard created this Life Tributes page to make it easy to share your memories.

Send flowers to the Shepard family.