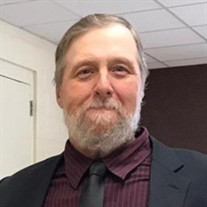 David Allen Froelich, 54, of Napoleon, Ohio was welcomed into his heavenly home on Thursday, January 6, 2022, at the Henry County Hospital. He was born February 5, 1967, in Napoleon, to Daryl and Mary (Yocom) Froelich. After dating the girl David always said he fell in love with at fist sight for almost 8 years, he married Connie Sue Hogrefe on September 18, 1993, at St. Paul Lutheran Church, Napoleon. David was a member of St. Paul Lutheran Church, Napoleon. David was a very experienced forklift technician and enjoyed teaching others his skills. He was often called at home to troubleshoot a problem, many of which his expertise allowed him to do so over the phone. David was valued for his forklift knowledge at Toyota Material Handling, Crown, Miami Industrial Lift and NMS. He also worked for O’Reilly’s Auto Parts where customers took advantage of his mechanical skills. He was a true outdoorsman, enjoying hunting, fishing and camping. David was the family handyman and could fix or build almost anything, he also enjoyed competing in drag races at Norwalk and Milan racetracks. David had an amazing time going on a mission trip to Kentucky through his church. He loved having his family close and included them in all of their vacations and adventures. David’s proudest title was being Papa to his grandchildren. He is survived by his loving wife of 28 years, Connie; children, Nikita (Kevin) Herren, Joshua (Tasha Diehl) Froelich, Sonny (Libertti Horner) Froelich; grandchildren, Addison, James, and Ezekiel Herren; father, Daryl; and sisters, Donna (Jake) Schwiebert, and Denise Froelich. David was preceded in death by his mother, Mary. Friends and family will be received at the Rodenberger-Gray Funeral Home, Napoleon, on Sunday, January 9, 2022, from 2:00 PM until 6:00 PM. Funeral services will be held at St. Paul Lutheran Church, Napoleon, on Monday, January 10, 2022, at 1:00 PM with an hour of visitation prior to services. Interment will follow at Glenwood Cemetery, Napoleon. Memorial contributions may be made to the Brianna Marie Foundation. Online condolences and messages may be shared with the family at rodenbergergray.com.

David Allen Froelich, 54, of Napoleon, Ohio was welcomed into his heavenly home on Thursday, January 6, 2022, at the Henry County Hospital. He was born February 5, 1967, in Napoleon, to Daryl and Mary (Yocom) Froelich. After dating the girl... View Obituary & Service Information

The family of David Allen Froelich created this Life Tributes page to make it easy to share your memories.

David Allen Froelich, 54, of Napoleon, Ohio was welcomed into...

Send flowers to the Froelich family.