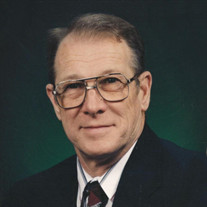 Darryl Robert “Tony” Parcher, 87, of Napoleon, Ohio died peacefully on Thursday, March 10, 2022 at St. Vincent Mercy Medical Center, Toledo, Ohio. He was born September 9, 1934 in Toledo, Ohio to the late Port and Helen (Fout) Parcher. Tony graduated in 1952 from the Defiance High School. He enlisted in the United States Navy Reserve in 1952 and then the United States Marine Corps in 1954 and served until 1957. He was a member of the Napoleon American Legion. Tony was employed at Campbell Soup Company for over 37 years. After retirement he worked part-time at his son Patrick’s business, making many friends and acquaintances along the way. He was a member of St. John United Church of Christ, Holgate, where he was a former Sunday School Teacher and Superintendent, Consistory member and past President, Deacon, and Elder. Tony married Janet Copeland on November 25, 1955 and she passed away on July 26, 2013. Together they had 3 children; David (Peggy) Parcher; Patrick (Sheila) Parcher, and Jody (Patrick) Dille; grandchildren; Michelle (Gordon) Krueger, Matthew (Lisa) Dille, Jenna (Christopher) Shuknecht, Stefanie (Conrad) Williams, Zachary Parcher, Morgan Parcher, and Collin Parcher, great grandchildren; Payton, Alexis and Avery Krueger, Aaron and Amelia Shuknecht, Olivia and Sunny Williams, and Cameron Dille. He was also preceded in death by a grandson, Alexander Parcher. A private memorial service will be held at a later date. The family suggests memorial donations be made to St. John United Church of Christ, I-946 OH-108, Holgate, OH 43527. Online condolences may be made at www.rodenbergergray.com

The family of Darryl "Tony" Parcher created this Life Tributes page to make it easy to share your memories.

Send flowers to the Parcher family.