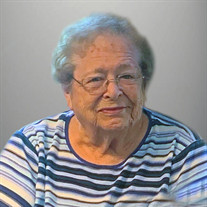 Cornie L. Crossland, 88 of Defiance, Ohio passed away on July 12, 2021. She was born on February 22, 1933, in Henry County, Ohio to Clarence and Lavina (Agler) Gessner. Cornie married Franklin Crossland on August 30, 1952, and they shared 67 years together. Cornie was a member of St. John United Church of Christ, Holgate, Ohio. She liked playing cards with family and friends. Cornie enjoyed going to Canada for the family fishing trips for almost 50 years. She loved spending time with her friends and family; and watching birds and other critters in her backyard. Cornie is survived by her daughters, Joy (John) Sizemore and Lisa Crossland; grandchildren, Shanna Crossland, Edwin (Ashley) Kimmel,III., Mollie (Greg) Gibson, and Frankie Alvarado Jr.; great grandchildren, Faith, Addie, Gracie and Mason Gibson, Caiton, Cassidy, DeJa, and Destiny Kimmel , and Peyton and Paisley Alvarado; and brother, Gary Gessner. In addition to her parents, she was preceded in death by her husband Frank; son, Kevin; half brothers, Robert (Marie) Gessner and Warren (Kathleen) Gessner; and sister-in-law, Linda Gessner. Funeral service will be private. Interment for Frank and Cornie will take place at Riverview Memory Gardens, Defiance, where military honors will be held for Frank. Memorial contributions may be made to CHP Defiance Inpatient Hospice. Online condolences and messages may be shared with the family at rodenbergergray.com.

The family of Cornie L. Crossland created this Life Tributes page to make it easy to share your memories.

Cornie L. Crossland, 88 of Defiance, Ohio passed away on July...

Send flowers to the Crossland family.