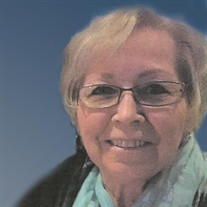 Connie Lou (Knapp) Beltz, 74, of Napoleon, Ohio passed away peacefully on Thursday, February 18, 2021 at Bridge Hospice, Bowling Green, Ohio. She was born December 7, 1946 in Napoleon, Ohio to the late Harold and Betty (Hatfield) Knapp and lived in Okolona, Ohio. Connie was a graduate of Florida High school. On December 26, 1991, she married the love of her life, Jerry Beltz and he survives. Connie had the biggest heart and was always there to lend a helping hand to those in need. She enjoyed her time helping others at the Angola Senior Center and loved her dogs. She was a member of the Napoleon American Legion Auxiliary and Napoleon Women of the Moose. She is also survived by her daughters, Pam Johnston (Darrel Ellinwood), Robin (Chad) Hershberger, and Amy Jo (Jim) Buchhop; 3 stepchildren, Jana, Jennifer, and Matthew Beltz; grandchildren, Abbey, Heather, Amelia, Troy, Seth, Alexandria, and a brother, Terry Knapp. She was also preceded in death by her stepmother Onnie Knapp. A public graveside service at Glenwood Cemetery will be held this spring and the date will be announced later. Memorial contributions in honor of Connie may be made to Bridge Hospice or a charity of the donor’s choice and mailed to Rodenberger-Gray Funeral Home 1010 Westmoreland Ave. Napoleon, Ohio 43545. Online condolences may be left for the family at www.rodenbergergray.com

The family of Connie Beltz created this Life Tributes page to make it easy to share your memories.

Send flowers to the Beltz family.