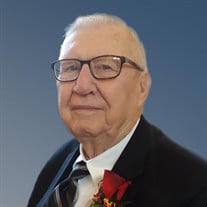 Charles John McClure, 87, of Napoleon, Ohio passed away at his home on Thursday, April 8, 2021 surrounded by his family. He was born in Delphos, Ohio on October 21, 1933 to Guy and Sophia (Wiechart) McClure. Charles married Mary Lou Bahnsen in Oak Harbor, Ohio on October 21, 1961. Chuck received his Bachelor’s Degree in Civil Engineering (BSCE) from Ohio Northern University in 1961 and then obtained his Professional Engineers and Professional Surveyors Licenses (PE/PS). He started his career with the Finkbeiner Pettis and Strout Company designing water treatment facilities. Chuck was honored to design the water system for his hometown of Ottawa, Ohio. He served his local community both as Henry County Engineer from 1976 to 1984, and then as Planning and Design Engineer for the Ohio Department of Transportation from 1984 until he retired in 1996. Chuck proudly served his country in the US Army and was stationed in Korea during the Korean War. He had a great sense of humor and loved to make his family laugh. Chuck enjoyed taking his granddaughters fishing and loved spending time with his family. Chuck is survived by his loving wife of almost 60 years, Mary Lou; children, Ann (Steve) Clark and Stephen (Molly) McClure; grandchildren, Paige (Andrew) Huff, Payton Clark, Anna McClure, and Kathleen “Kiki” McClure; great grandson, Aiden Huff; brother, Robert McClure and sister, Susie (Donald) Warnecke. In addition to his parents, he was preceded in death by his brother, Don McClure. Due to COVID-19, funeral services will be privately held at Rodenberger-Gray Funeral Home, Napoleon. Interment will immediately follow at Glenwood Cemetery. Memorial contributions may be made to Heartland Hospice or the Henry County Humane Society. Online messages and condolences may be shared with the family at rodenbergergray.com.

Charles John McClure, 87, of Napoleon, Ohio passed away at his home on Thursday, April 8, 2021 surrounded by his family. He was born in Delphos, Ohio on October 21, 1933 to Guy and Sophia (Wiechart) McClure. Charles married Mary Lou Bahnsen... View Obituary & Service Information

The family of Charles McClure created this Life Tributes page to make it easy to share your memories.

Charles John McClure, 87, of Napoleon, Ohio passed away at his...

Send flowers to the McClure family.