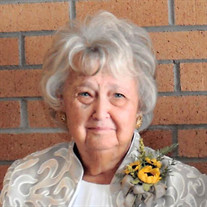 Carol J. Frysinger, 88, of rural Napoleon, Ohio died peacefully on Friday, March 13, 2020 at her residence surrounded by her family. She was born June 15, 1931 in Napoleon, Ohio to the late Albert and Ora (Stryker) Long. On April 9th, 1950 she married Delmar Frysinger in Liberty Center and he preceded her in death on January 16, 2011. Carol was a homemaker and worked beside her husband on the family farm. She also worked as a Dietary Aide at Fulton County Health Center from 1987-1999 and then volunteered until 2010. She was a member of Liberty Chapel United Methodist Church. She enjoyed taking camping trips with her family to various destinations and spent over 40 memorable years camping at the Henry and Fulton County Fair. She was an avid bowler and played in a couple card clubs. She enjoyed watching the Buckeyes, Browns, and Indians and working in the garden. Most of all, she loved spending time with her family and following all of her grandchildren and great grandchildren’s activities. She is survived by her children, Sandy (Greg) Weber of Wauseon, John (Tricia) Frysinger of Napoleon, and Jodi (Jeff) Gyurasics of Perrysburg; son-in-law, Bob Meyer of Napoleon; grandchildren, Jason (Lisa) Meyer, Carrie (Cary) Drewes, Amber Figy, Abbie (Fernando) Chavez, Andrea (Mike) Snyder, Alexa (Matthew) Brown, Levi Frysinger, Nicole (Rich) Ryder, Steven Singh, Jonathon (Shanna) Singh, Hannah Gyurasics, A.J. Gyurasics, and Joel Gyurasics; and 20 great grandchildren. She was also preceded in death by daughters, Sue Meyer and Janet Singh; granddaughter, Ginger Meyer; and siblings, Robert, Julian, Elnora, and Bill Long. Funeral services will be held on Friday, March 20th at 11 a.m. at Liberty Chapel United Methodist Church. Interment will follow at Morrison Cemetery. Visitation will be held on Thursday from 2-8 p.m. at Rodenberger-Gray Funeral Home, Napoleon, and Friday from 10-11 a.m. at the church. Memorial contributions are suggested to the Liberty Chapel United Methodist Church.

Carol J. Frysinger, 88, of rural Napoleon, Ohio died peacefully on Friday, March 13, 2020 at her residence surrounded by her family. She was born June 15, 1931 in Napoleon, Ohio to the late Albert and Ora (Stryker) Long. On April 9th, 1950 she... View Obituary & Service Information

The family of Carol Frysinger created this Life Tributes page to make it easy to share your memories.

Send flowers to the Frysinger family.