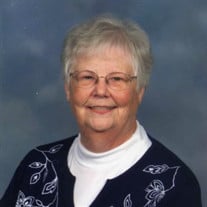 Carol A. (Fry) Annis, 84, of Kettering, OH, died Monday, November 29, 2021 at Soin Medical Center, Beavercreek, OH. She was born June 27, 1937, in Centerline, MI to the late Lloyd and Anna (Mangus) Fry. On September 9, 1961, she married Donald R. Annis at St. Augustine Catholic Church of Napoleon. Carol worked at JCPenney and in St Augustine's church office. She was a member of St. Augustine Catholic Church. She is survived by two sons, Joseph (Elizabeth) of McKinney, TX, William (Kelli) of Marshall, MI; four daughters, Diana (Scott) Shirley of Kettering, OH, Janet (Geoff) Gilmore of Bryan, OH, Julie Boyce of Delaware, OH and Jennifer (Lee) Herge of Phoenix, AZ; 13 grandchildren, 12 great-grandchildren. In addition to her parents, she was preceded in death by her husband, Donald; older brothers, Lloyd Jr and Harlan; and her oldest daughter, Donna Eifort. Visitation will be held at the St. Augustine Ministry Center on Thursday, December 2, 2021 from 10:00 AM until 11:00 AM, followed by a Mass of Christian Burial at St. Augustine Catholic Church at 11:00 AM. Interment will follow at the church cemetery. In lieu of flowers, memorials may be directed to the St. Vincent de Paul Society. Online condolences may be shared with the family at rodenbergergray.com.

The family of Carol Ann Annis created this Life Tributes page to make it easy to share your memories.

Send flowers to the Annis family.