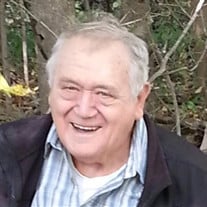 Carl H. Dettmer, 87, of Napoleon, Ohio died Friday, May 3rd, 2019 at Vancrest Nursing Home, Holgate, Ohio. He was born February 3, 1932 in Grand Rapids, Michigan to the late Carl and Kathrine (Hills) Dettmer. On May 6, 1995, he married Bonnie Scott. Carl attended the University of Toledo and became the Automotive Technical Instructor at Vanguard Vocational Center in Fremont, Ohio. He also was a substitute teacher for Henry County schools, Corrections officer at CCNO, and set up the automotive department for Walmart in Napoleon. Carl was a 32nd Degree Mason for the Napoleon Masonic Lodge, former Exalted Ruler for the Order of the Elks, Napoleon, and member of the Napoleon Moose and Eagles Fraternal organizations. He is survived by his wife Bonnie; sons, Steve (Pat) Dettmer of Wauseon, Michael Dettmer of Jackson, Wyoming, and Carl H. Dettmer, Jr. of Napoleon; grandchildren, Caroline (Brad) Booth and Jay Dettmer; great grandchildren, Carter and Caelyn; and sisters, Joy Jones of San Marcos, California, Marcie Sandell of Los Angeles, California, and Linda (Dick) Williams of East Lansing, Michigan. He was also preceded in death by a son, Jim Dettmer. Funeral services will be held at 11 a.m. on Wednesday, May 8th at Rodenberger-Gray Funeral Home, Napoleon. Interment will be held privately at St. John’s UCC Cemetery, Holgate. Visitation will be held on Tuesday from 4-8 p.m. at the funeral home with a Masonic Lodge Service at 7 p.m. and Elks Lodge Service at 7:30 p.m. Visitation will also be held on Wednesday from 10-11 a.m. Memorial contributions are suggested to the Elks National Foundation or Masonic Model Student Assistance Program.

The family of Carl Dettmer created this Life Tributes page to make it easy to share your memories.

Send flowers to the Dettmer family.