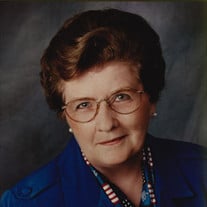 Betty June Huddle, 88, of Napoleon, Ohio passed into her Heavenly home on Wednesday, December 23, 2020. She was born in Colton, Ohio on June 19, 1932. She was the daughter of the late Charles and Leota (Gramling) Houts. Betty is survived by her husband, Herbert. They were united in marriage on May 6, 1951, by the Reverend Martin Zschocke at the St. Paul Lutheran Church in Napoleon. They have four children: Steven; Diann Mansfield, deceased; David (Rhonda); and Jean (Scott) Knepley; grandchildren Carissa Gilgenbach, Kathryn Steveline, Robin Civiello, Kara Payne, Michelle Hahn, Rachel Gerken, Jackie Anderson, and Nicole Knepley; 12 great grandchildren. She had two brothers, Bernard (Maude) and Charles, Jr. (Chuck). She had five sisters: Mildred (Jim) Gillespie; Marie (Leonard) Varnell; Arlene Griteman; and Patsy (Lee) Beck, all of Napoleon; and Helen (Robert) Myers of Tucson, Arizona (all deceased). Surviving are sister-in-law Anella Houts and brother-in-law Robert Griteman. In addition to her parents, she was preceded in death by her daughter, Diann Mansfield, and great grandchildren Alyana and Sunny. Betty graduated from the Liberty Center High School in 1950. She was their track queen in her sophomore year and drum major of the high school band in her junior and senior year, also drum major of the Henry County 4H band, having performed at the Ohio State Fair. Betty was the secretary for the Henry County Health Department and later spent 20 years in the Henry County Clerk of Courts office as Deputy Clerk. She was elected as Henry County Clerk of Courts for three terms and retired in 2000. She was a member of the St. Paul Lutheran Church in Napoleon. Betty loved to cook and try new recipes. She liked to travel with her husband, having been on three ocean cruise ship tours to the Caribbean Islands, Panama Canal, South America, Mexico, Aruba, Hawaii, and Alaska. They also made two trips to Europe, which included England, France, Normandy, Belgium, Holland, Germany, and Austria. She enjoyed camping when the children were growing up and traveled on many bus tour trips across the United States in later years. Friends and family will be received at St. Paul Lutheran Church, Napoleon, on Monday, December 28, 2020, from 10:00 a.m. until the time of services at 11:00 a.m. Interment will follow at Forest Hill Cemetery. Memorial contributions may be made to St. Paul Lutheran Church's organ fund and/or St. Paul Lutheran Church's radio station 94.1FM, WTPS. Online condolences and messages may be shared with the family at rodenbergergray.com. Livestreaming of the service may be viewed on stpaulnapoleon.org or St. Paul Napoleon's Facebook page. Due to the current health conditions surrounding COVID-19, masks will be required to attend services or visitation in accordance with the State. Please also respect social distancing and make use of the website to contact the family if you are not feeling well.

Betty June Huddle, 88, of Napoleon, Ohio passed into her Heavenly home on Wednesday, December 23, 2020. She was born in Colton, Ohio on June 19, 1932. She was the daughter of the late Charles and Leota (Gramling) Houts. Betty is survived by... View Obituary & Service Information

The family of Betty J. Huddle created this Life Tributes page to make it easy to share your memories.

Betty June Huddle, 88, of Napoleon, Ohio passed into her Heavenly...

Send flowers to the Huddle family.