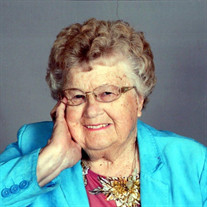 On Saturday, March 7, 2020, Bettie M. Roth, 88, departed this life for the far better life in the mansion prepared for her by the Lord Jesus. While we grieve, we do so in the certain hope that all who trust in Christ will be reunited in the resurrection of the dead. Bettie was born in Monroe Township, Henry County, Ohio on April 15, 1931 to Arthur and Louise (Panning) Arps. She entered into the Kingdom of Grace through the Rite of Holy Baptism on May 5, 1931 at Hope Lutheran Church, Hamler, Ohio. She renewed her Baptism vow on the day of her Confirmation before the altar of Hope Lutheran Church on May 13, 1945. On August 3, 1952 at Hope Lutheran Church, Bettie was united in marriage to Donald Helberg, who preceded her in death on January 25, 1968. Bettie later married Russell Roth on February 6, 1982 and he preceded her in death on August 18, 2014. Bettie is survived by her children, Dennis (Kay) Helberg of Defiance; Cheryl Helberg of Wauseon; Daniel (Linda) Helberg of Defiance; Charlene (Richard) Lime of Defiance; Dean (Michelle) Helberg of Defiance; stepchildren, Terry (Barb) Roth of Lewis Center and Peggy (Mike) Pierce of Wauseon; step son-in-law, Danny Wiebeck of Wauseon; grandchildren, Keri Helberg; Cole (Nicole) Helberg; Von Helberg; Renee (Christopher) Barton; Craig Erford; Ryan (Brittany) Helberg; Kara (Bill) Herr; Brock (Brittani) Lime; Brooke (Stephen) Leskow; Danielle (Evan) Vocke; Nicolle Helberg; McKenzie Helberg; and honorary grandson, Nathan Edwards and 12 step grandchildren; 14 great-grandchildren and 19 step great-grandchildren. Also surviving are her sisters, Ruth Bahler and Marian Dickmann and sister-in-law, Diane Arps. In addition to her parents, she was preceded in death by her sister, Arlene Hurst; brother, Ronald Arps; stepson, Tom Roth; step grandson, Adam Weder and William Baden, whom Bettie was engaged to and was killed while serving in the Korean War. Friends and family will be received at the Rodenberger-Gray Funeral Home, Napoleon on Wednesday, March 11, 2020 from 2:00 pm until 8:00 pm. Funeral services will be celebrated at Bethlehem Lutheran Church, Okolona on Thursday, March 12, 2020 at 11:00 am with an hour of visitation prior to services. Interment will follow in the church cemetery. Memorial contributions may be made to the American Cancer Society or the Dana-Farber Cancer Institute. Online condolences and messages may be shared with the family at rodenbergergray.com.

On Saturday, March 7, 2020, Bettie M. Roth, 88, departed this life for the far better life in the mansion prepared for her by the Lord Jesus. While we grieve, we do so in the certain hope that all who trust in Christ will be reunited in the... View Obituary & Service Information

The family of Bettie Marie Roth created this Life Tributes page to make it easy to share your memories.

Send flowers to the Roth family.