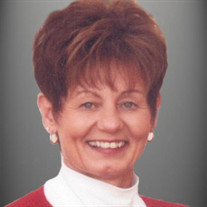 Belinda “Bea” Hayes, 64, of Liberty Center, Ohio died peacefully on Sunday morning, July 12, 2020 at CHP Defiance Area Inpatient Hospice Center. She was born October 6, 1955 in Cincinnati, Ohio to George and Verla (Sallee) Shuler. On October 29, 1983, she married Richard Hayes in Swanton, Ohio. Bea was a graduate of Bowsher High School. After a short time of working at Ford Motor Company, Toledo she decided to follow her heart and become a Registered Nurse. She graduated Magna Cum Laude from NWSCC in the Nursing Program. After acquiring many different levels in the nursing field, she eventually went on to work for the Ohio department of Job and Family Services in workers compensation determination. Bea was the ultimate bargain shopper!! She loved collecting coupons and planning out black Friday Christmas days. She was also an animal lover and was known to bring home stray animals to raise in a loving home. Most of all, she loved her grandkids and could be found attending most every sporting activity they participated in. She attended St. Paul Lutheran Church, Napoleon, Ohio. She is survived by her mother, Verla March Butler of Peru, Indiana; husband Rick Hayes, Liberty Center; son, Ted (Cyndi) Shroyer of Napoleon; granddaughters, Aubrey and Averie Shroyer; step daughter, Keri (Matt) Stamm; step granddaughters, Zachary and Addison Stamm; and sibilings; Debbie (Ron) Glasier, GiGi (Leroy) Bodine, and Rick Shuler, all of Peru, Indiana. Funeral services will be held on Thursday, July 16 at 2 p.m. at St. Paul Lutheran Church, Napoleon, where visitation will be held from 10 a.m. – 2 p.m. A live stream will be available at www.stpaulnapoleon.org Social distancing will be observed and face coverings are suggested. Memorial contributions may be directed to CHP Defiance Area Inpatient Hospice, St. Paul Lutheran Church, or St. Jude’s Children Hospital. Online condolences may be made at www.rodenbergergray.com

The family of Belinda "Bea" Hayes created this Life Tributes page to make it easy to share your memories.

Send flowers to the Hayes family.