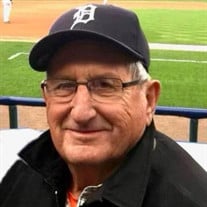 Arthur Jewell Erford passed from this life on Saturday, May 15, 2021 at Mercy Defiance Hospital. Art was born June 18, 1931, next to the youngest of 10 children of Henry Michael and Mary Dorothy (Mack) Erford, on a Hamler, Ohio farm where he spent the next 89 years. As a boy, one of his earliest memories was riding astride a Belgian draft horse while working his father’s fields. He loved all sports, but particularly baseball. Throughout his life he was an avid Detroit Tigers fan and rooted for the Notre Dame Fighting Irish. Art served his country, his community and was devoted to his wife and family. He will be remembered for his optimism, kindness and humor, stories, and incredible memory. He loved dancing and singing, frequently breaking into spontaneous song. Art graduated in 1949 from Hamler High School, turning down a full scholarship to The Ohio State University in agriculture, saying “I already know how to do this.” He was drafted in 1952 and served in the Korean conflict for two years. He took great pride in the fact that his three older brothers served during WWII, with Henry “Mack” earning a Purple Heart and Bronze Star. Art married Mary Ann Bratton in Leipsic, Ohio, on September 17, 1955. Together they danced through life, farming and raising five children. For a number of years, they owned and operated the Dairy Creme in Deshler. Over the years, Art served as: president of the Farmers Union, a Marion Township Trustee, and President of Hamler Co-op. He was a member of the Hamler American Legion, St Paul’s Disciples of Christ, the Northwesternaires Chorus (Defiance Chaper) for 40 years, a certified member of the Society for the Preservation and Encouragement of Barbershop Quartet Singing in America, a life-long member of Patrick Henry Atheletic Boosters, United States Trotting Association and the Ohio Horsemen Association. He had owned and bred harness race horses since 1962, frequently naming them for children and grandchildren. He and Mary followed their Erford Stables horses, attending races throughout the Midwest. He loved to golf and his family hosted the Annual Art Erford Open on his birthday for the last nine years. One of the things he missed most in recent months, was meeting with a group of friends every morning at the Hamler Diner for coffee. Art was preceded in death by his parents; sisters Lenore Gerschutz, Jean Hammer and Rita “Marvelle“ Clausen; brothers Henry “Mack,” John, and Reynold; and son-in-law Ronald Treece. He is survived by his wife Mary; sisters Margaret Zachrich, Eileen Reese, and Mary Ann (Jim) Gerbers; daughters Karla Treece, Jill (Mark) Schumacher, Beth (Larry) Vocke, and Ann (J. Douglas) Miller; son, Paul (Stacy) Erford; grandchildren Brant (Rachel) Treece, Shanna (Andy) Barton, Lauren (Matt) Oesterle, Dane Arthur (Brittany) Treece, Jon Schumacher, Andrew Schumacher, James Schumacher, Paul Matthew Erford, Wayne Arthur Erford, Katie (Adam) Erford-Geckle, Elliot Arthur (Emily) Vocke, Derek (Mackenzie) Vocke, Evan (Danielle) Vocke, Isaac Miller, Meredith Miller, and Eldon “Mack” Miller; and great-grandchildren Maddox Treece, Eli Treece, Alexandria Jewell Barton, Drew Barton, Pierce Barton, JJ Barton, Briar Oesterle, Brooks Oesterle, Neve Oesterle, Tatum Treece, and Presley Treece. Two additional great-grandchildren are on the way. The family will receive friends at Rodenberger Funeral Home, Napoleon, Ohio on Wednesday, May 19, 2021 from 4-7 PM with a prayer service held at 6:30 PM. The Funeral Mass will be celebrated at St. Paul Catholic Chaple, Hamler, on Thursday, May 20, 2021 at 10:30 AM with an hour of visitation prior to services. Interment with military honors will be held at St. Paul Cemetery. In lieu of flowers, the family requests donations to Hamler Fire and EMS or a charity of your choice. Online messages and condolences maybe shared with the family at rodenbergergray.com.

Arthur Jewell Erford passed from this life on Saturday, May 15, 2021 at Mercy Defiance Hospital. Art was born June 18, 1931, next to the youngest of 10 children of Henry Michael and Mary Dorothy (Mack) Erford, on a Hamler, Ohio farm where he... View Obituary & Service Information

The family of Arthur J. Erford created this Life Tributes page to make it easy to share your memories.

Arthur Jewell Erford passed from this life on Saturday, May 15,...

Send flowers to the Erford family.