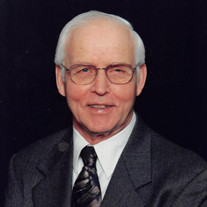 Arnold F. “Arnie” Ehlers, 89, of Defiance, Ohio died peacefully on Friday, April 30th, 2021 at Vancrest of Holgate. He was born on March 8, 1932 to the late Emil and Meta (Seedorf) Ehlers. Arnie was a 1951 graduate of Deshler High School and attained the rank of Corporal in the United States Army during the Korean War. On August 8, 1954 he married Leona Elling at St. John Lutheran Church, Freedom Twp. and she survives. Arnie worked as a UPS Driver for over 37 years. He was proud of his faith in God and always lead a Christian life. He was a member of St. Mark’s Lutheran Church, Defiance, where he held various positions in the church. He was also a life member of the Napoleon American Legion and VFW and was a member of the Low German Club. He is also survived by his children, Randy (Deb) Ehlers of Defiance, Crystal (David) Wright of Lewis Center, and Dan (Dodie) Ehlers of Deshler; grandchildren, Sean (Alex) Wright, Adam (Adie) Wright, Josh Ehlers, and Andrew Ehlers; step grandchildren, Kevin (Sonja) Wright and Chris (Kurt) Hattendorf; 3 great grandchildren, and 6 step great grandchildren; sisters, Emma Wachtman of Napoleon, Norma (Dick) Beck of Ridgeville Corners; brothers, Harold “Bud” (Connie) Ehlers of McClure, and Fred “Toot” (Doris) Ehlers of McClure. He was also preceded in death by a brother and sister-in-law, Eldor “Dewey” (DeNelda) Ehlers, and brother-in-law, Harold Wachtman. Funeral services will be held at 11 a.m. on Wednesday, May 5th at St. Mark’s Lutheran Church 25950 Nagel Rd. Defiance, Ohio. Interment will follow at Riverview Memory Gardens where military honors will be accorded by the Napoleon Joint Veteran Posts. Visitation will be held on Tuesday from 2-8 p.m. at Rodenberger-Gray Funeral Home, Napoleon and Wednesday from 10-11 a.m. at the church. Memorial contributions may be given to the charity of the donor’s choice. Online condolences may be made at www.rodenbergergray.com.

The family of Arnold "Arnie" Ehlers created this Life Tributes page to make it easy to share your memories.

Send flowers to the Ehlers family.