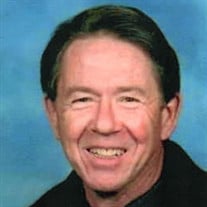 Anthony Raymond Westhoven, 78, of Liberty Center, Ohio passed away on Friday, July 9, 2021. He was born on January 23, 1943, in Liberty Center, Ohio to Francis and Alta (Faeth) Westhoven. Tony was a graduate of Divine Word Seminary in Perrysburg, Ohio and then went on to attend Bowling Green State University, earning a bachelor’s degree in Earth and Atmospheric Science. He was employed by the State of Ohio Bureau of Jobs and Family Services for over 20 years. Tony spent many years helping friends and family with various endeavors and was very involved in activities at St. Augustine Catholic Church. He was an avid Notre Dame fan and outdoor enthusiast. Tony is survived by his son, Toby Westhoven (Amanda Redder); grandchildren, Cheyenne, Amara, and Alexander Westhoven; brothers, Bill Westhoven and Jerry (Alma) Westhoven; sisters, Mary Ann Widdowson, Virginia Schuster-Fetter, Catherine Thompson, and Norrine Hoeffel; sisters-in-law, Jean Westhoven, Joanne, Westhoven, and Janet Westhoven. In addition to his parents, he was preceded in death by his son, Brandon Westhoven, brothers, Donald (Katie) Westhoven, Jim Westhoven, Paul Westhoven, and Gene Westhoven; infant sister, Rita Westhoven; sister-in-law, Ann Westhoven; and brothers-in-law, Richard Widdowson, Joe Schuster, Don Fetter, James Thompson, and David Skilling. Friends and family will be received at the Rodenberger-Gray Funeral Home, Napoleon, on Monday, July 12, 2021, from 4:00 PM until 8:00 PM with a Rosary Service at 7:30 PM. The Funeral Mass will be celebrated on Tuesday, July 13, 2021, at 10:30 AM, at St. Augustine Catholic Church, Napoleon. Interment will immediately follow at St. Augustine Catholic Cemetery. Memorial contributions may be made to the church or a charity of your choice. Online condolences and messages may be shared with the family at rodenbergergray.com.

The family of Anthony "Tony" Westhoven created this Life Tributes page to make it easy to share your memories.

Send flowers to the Westhoven family.