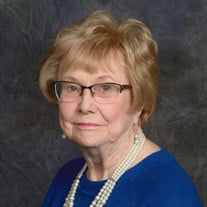 Annetta Anna Rosebrock, 90, of Napoleon, Ohio passed away on Saturday, March 6, 2021 at the Henry County Hospital. She was born in Deshler, Ohio on May 26, 1930 to the late Albert and Lorena (Schwiebert) Behrman. Annetta married Edwin Carl Rosebrock on October 29, 1950 at St. John’s Lutheran Church, Freedom Township. Edwin preceded her in death on February 7, 2015. Annetta was a homemaker, a well-known seamstress, and worked together with Ed on the family farm in Freedom Township until they moved to Napoleon. She enjoyed playing cards, polka dances, being with her brothers and sisters and their spouses, many winter Florida trips, and adored her grandchildren and great grandchildren. She was a perfectionist when it came to her seamstress work, maintaining her house, and made the best cinnamon rolls and pumpkins cookies in Henry County! She was a tractor driver, cow milker, grain hauler, housewife, and a devout Christian. Annetta was a member of St. John Lutheran Church, Freedom Township, where she and Ed served the church and school in various positions throughout the years. Surviving are her four children, Debra (Jerry) Lange, John (Joyce), James (Diane), and David (Karen); eight grandchildren, twenty-two great grandchildren and one great great grandchild. Also surviving are sisters, Loretta Schroeder, Danelda Drewes, Marjorie Behnfeldt, Darlene Rutter and Karen Rabe; and brother, Herbert. In addition to her parents, she was preceded in death by her husband, Ed; and brothers, Ray, Bill, Robert, Delbert, Harold and many in-laws. Funeral Services will be private for the family. Interment will take place at St. John Lutheran Cemetery. The family request the memorials may be made to the St. John Lutheran Church, Freedom Township. Online messages and condolences may be shared with the family at rodenbergergray.com. Services will be livestreamed from the church Facebook page: facebook.com/StJohnFreedomTownship.

Annetta Anna Rosebrock, 90, of Napoleon, Ohio passed away on Saturday, March 6, 2021 at the Henry County Hospital. She was born in Deshler, Ohio on May 26, 1930 to the late Albert and Lorena (Schwiebert) Behrman. Annetta married Edwin Carl... View Obituary & Service Information

The family of Annetta Anna Rosebrock created this Life Tributes page to make it easy to share your memories.

Annetta Anna Rosebrock, 90, of Napoleon, Ohio passed away on...

Send flowers to the Rosebrock family.